Gunnar Bjerknes-Haugen is the conducter of Kammerkoret Nesodden Frogn (KNF). He works as chief municipal medical officer in Frogn and runs his own practice. He is an educated doctor from the University of Oslo (UiO), holds a master in science (MSc, mathematics, physics and cybernetics) and a bachelor in music. Gunnar has been singing in The Norwegian Broadcastings Boys Choir "Sølvguttene" since 1959 (the last 50 years as tenor), has been part of, and has conducted several choirs throughout his career. Moreover, he has been involved in arranging various shows, concerts and musicals. Gunnar has been conducting KNF since its establishment in 1988. 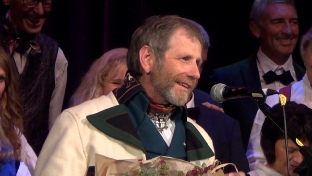 It all started back in 1988 when our conductor, Gunnar Bjerknes-Haugen, was asked to perform at a concert in Frogn church. It was also a desire to have a choir that could perform in the church at special ceremonies. Later the same year Gunnar was asked to be responsible for the cultural programme in connection with a “Friendship Vessel” bound for Poland with medical equipment donated from Sunnaas hospital at Nesodden. The choir was asked to perform during the arrival in Gdansk in Poland. Since this coincided with the fall of the Polish regime, it got a lot of media focus in Norway. This helped forging KNF to become a permanent choir.

Gunnar’s father, who died the same year had a dream of having Midnight concerts in Frogn church on the night before Christmas Eve, following European traditions with midnight concerts during Christmas and New Year. The first concert was held that same year and it became an immediate success. Since then Midnight concerts have been performed every year. KNF has performed in national and international choir festivals in St. Petersburg and Budapest

During the 90-ies KNF evolved into more of a “contract choir” that could undertake almost any requests. The choir performs with Church music, Christmas corals, Norwegian national- and folk music, a Maritime programme (chanties), Barbershop, Negro spirituals and a variety of international songs.

NFK is a mixed choir with about 40 singers from the two municipalities Nesodden and Frogn, close to Oslo, the capital of Norway. We have issued one CD, “Julenatt” (Christmas night and LP with national songs, and a few cassette tapes.

that we will all remember